This post is written with Canada in mind — but it’s always a good idea to meet with elected officials.  So if you live outside Canada — go and meet them anyway!  It’s harder for them to ignore you face-to-face.  They may still ignore you, but if there are enough us, we will eventually wear them out. 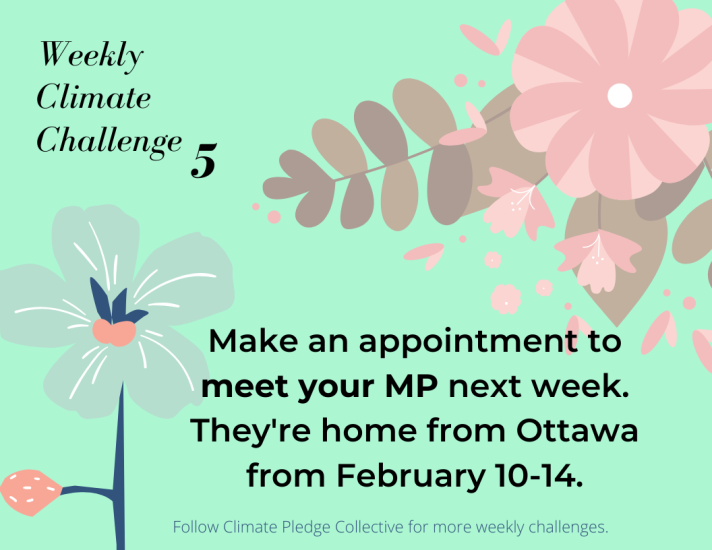 Parliament doesn’t sit between February 10 and 18, so many MPs come home to their constituencies.  Call their office this week to set up an appointment (contact info here).  You can also try just dropping in — you might not meet your MP, but they likely have staff in the office all day.  If your MP is a Liberal, this is extra important as they are setting policy right now.

WHAT TO TALK ABOUT?

Pick a focus that makes sense to you, because that’s what will make you most effective.  Don’t be afraid to get personal: tell them about your kids or your anxiety.  You can advocate for a specific policy, or you can just share your concerns about climate change and back that up with evidence that Liberal policies are insufficient.  Put them on the defensive by grilling them on their climate knowledge, it’s their job to know!  Some ideas include:

THE FRONTIER MINE Teck Resources has proposed a gigantic new oilsands project in Northern Alberta.  Local indigenous people are opposed and it will be impossible to meet our climate targets if it goes ahead.  The Liberals claim we will be net-zero by 2050, but the Frontier Project is expected to pump out oil into the 2060s.  But the Liberals really, really want to approve it anyway.  READ MORE HERE.  This issue will be top of mind for the Liberal Cabinet right now and they’re definitely feeling the heat.

COASTAL GASLINK and WET’SUWET’EN SOVEREIGNTY The RCMP are helping Coastal Gaslink force a pipeline through unceded Wet’suwet’en Territory in B.C. against the wishes of hereditary chiefs.  READ MORE HERE.

THE SCIENCE AND IMPACTS Ask your MP for their understanding of climate science, potential impacts and the effectiveness of current policies.  Remind them that global emissions have gone up every year, that Canada’s Paris pledges are weak, and that Canada isn’t expected to meet its weak goals.  Matt is planning to grill his MP on ocean acidification and the wet bulb temperature — because most people don’t understand how devastating it is.  In general, although people understand climate change in loose terms, very few know how fast and how devastating its impacts will be.

FOSSIL FUEL SUBSIDIES We give a crazy amount of subsidies to oil and gas companies and consumers.  It’s a complicated topic of course — some of these tax breaks apply to all companies, others support the energy costs of Northern communities, others are open-ended innovation or sustainability grants that oil companies apply for.  The Liberals know it’s a problem — Bill Morneau’s mandate letter requires him to tally them up:

“Finalize a report, which will include a list of federal fossil fuel subsidies including the description of the subsidies, annual costs and analysis of the subsidies. This report will be made public once a peer review is finalized.”

To us, that sounds like the definition of Liberal foot-dragging!  This discussion has to move faster and be more transparent.  Tell them you are watching and waiting!

REGULATING SUVs and TRUCKS or Fuel Efficiency The Liberals are aiming to gradually grow EV sales.  But, right now, these emission reductions are being eaten up by growth in SUVs and Light Trucks.  Toronto’s transport emissions are going UP not DOWN!

GETTING RETROFITS DONE  The Liberals have some decent policy ideas about loans and subsidies to bring down emissions.  But price is only ever part of the issue.  How can we be sure all building will get retrofitted?  What plans do they have to advertise these programs?  How will contractors be coached to sell them?  What about a policy like the one in NYC which mandates maximum emissions per square foot?

RAISING THE CARBON TAX The Liberals have put in a Carbon Tax of $20/tonne of Co2 emissions — or about 4¢ litre on gasoline.  It’s a good first step but it’s far short of what we need.  In the 1990s, an internal Imperial Oil report suggested that only a price of $55/tonne would stabilize emissions!  MunichRE, a huge reinsurance company that will be left holding the bag when the climate apocalypse really hits the fan, held up Sweden as a role model on carbon pricing — their tax is currently $167 CDN/tonne.  Our price is set to rise to $50/tonne over the next few years, but that’s not high enough to get the job done!  Will 11¢ a litre really change behaviour?