Why BankSwitch? Why Now?

HOW BANKSWITCH WORKS in 9 SECONDS

1. The Production Gap is terrifying.

Most climate policy is focused on consumption. The Paris Accord is based on each country’s consumption. But oil companies are planning to produce far more fossil fuels than the world is planning to consume — because they’re betting at least some countries will fail to limit consumption.

It’s hard to stop production for the international market. Activists only have a few options: they can block oil production and transport with their bodies), pressure governments to regulate production (which the Liberals are unlikely to do) or block the money pipeline. Bank Switch accounts for the production gap by targeting the loans that allow fossil fuel expansion to happen!

Divestment campaigns have gathered a lot of momentum in recent years and they’re a good thing. Divesting from a company lowers its stock price, but it doesn’t impact the company’s day-to-day balance sheet. Fossil fuel companies can still build new projects even while their stock price is falling if they have access to loans. So we have to stop the loans.

All of the Big 5 Canadian Banks are in the top 25 funders of fossil fuels in the world. Since the Paris Agreement they have poured $481 BILLION (USD) into their efforts to guarantee a climate apocalypse! Although a few American banks have doled out more money, they’re bigger companies so it represents a smaller percentage of their total lending. The Banking on Climate Change report also tallies up fossil fuel policies – will a bank fund thermal coal? what about arctic drilling or fracking?. In terms of policies, the CDN banks really are the absolute worst: scoring between 0.5 and 3 points out of a possible 200 points! Even horrific American banks like Chase have some standards and score between 15 and 25 out of 200.

4. The tar sands are completely reliant on CDN banks.

Among those especially dangerous fossil fuel projects that US banks are backing away from are the tar sands. Tar sands oil has especially high CO2 intensity per barrel. That’s because it takes a lot of energy to get the oil out of the sand, so companies burn natural gas to get it out! Even global oil companies are starting to worry about their carbon footprint and moving their money from high CO2 oil to lower CO2 oil. Foreign money is fleeing from the tar sands as fast as it can — without the CDN banks it would be completely dead.

5. CDN banks are feeling the pressure.

BankSwitch isn’t the first campaign to call out CDN banks. Toronto350 and others have been holding them to account for years. RBC hates being known as the dirtiest CDN bank and just last month they made a lot of noise about a minor update to their thermal coal policies. The new policy doesn’t have much material impact because of the way it is worded, but it shows that RBC is willing to make changes to improve its image. 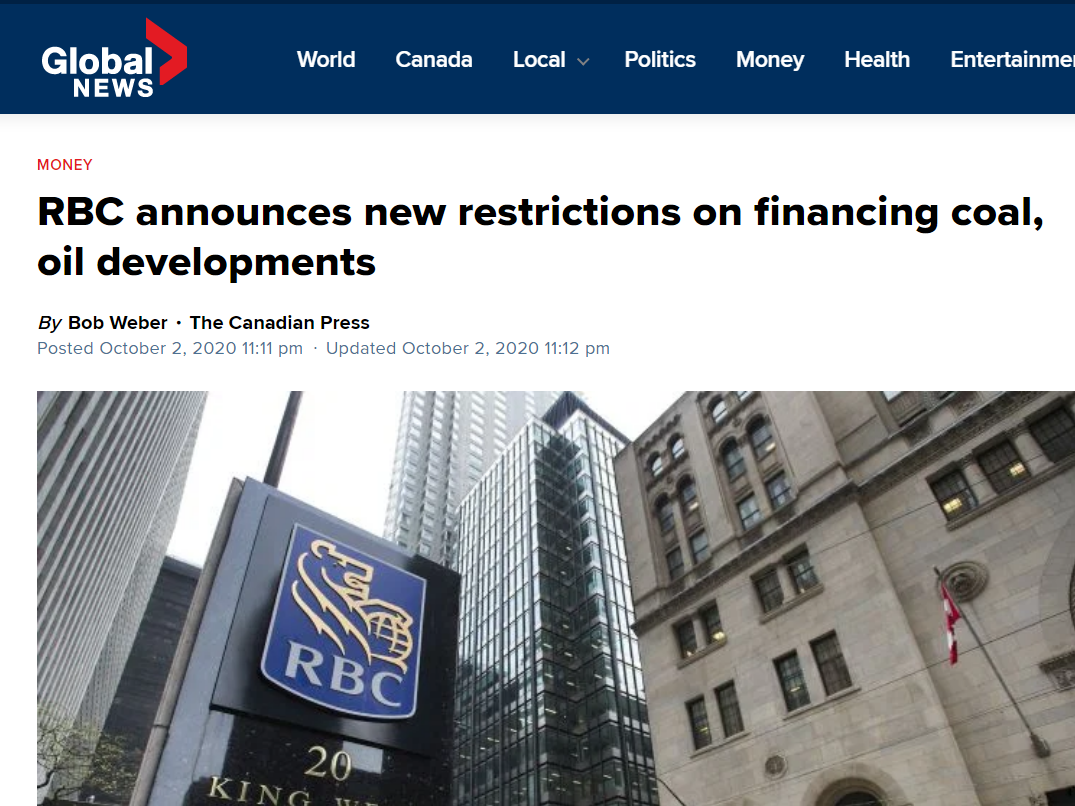 5. No Institution is a MONOLITH.

While it’s tempting to think of the banks as pure evil, based on their evil behaviour, every institution is internally complex. There are people inside the CDN banks arguing that it’s time to get out of the fossil fuel game. We know this, because we know some of them personally. Some bankers want to get out of fossil fuels for moral reasons, others for purely economic reasons — fossil fuels look like a riskier and riskier investment with every passing year. BankSwitch is designed to help these people win arguments in internal meetings by providing them with more ammunition.

We ask you to contact branch managers first in order to get the whole bank talking about climate change. The more people talk about fossil fuel investments the more indefensible they appear. Branch managers also genuinely care if they lose accounts – so a handful of phone calls are more likely to flip one person in the bank at this level. Finally, by tallying up all the Canadians who want a sustainable banking option, we get the banks’ marketing and client acquisition teams thinking about the issue. Could a policy announcement steal thousands of clients from their biggest competitors? That’s the type of argument that might just win over even the most cynical executives.

Let’s be honest: TD Bank is not afraid of Climate Pledge Collective. But what if BMO decided to end their fossil fuel lending and launch a big ad campaign about it? What if they set up a special phone line so you could transfer all your accounts in a few minutes? Now that would scare the other banks.

Giving the banks six months to think about their fossil fuel policies is likely to be more effective than all of us moving our money to credit unions one by one, because the banks will have to worry about what the other big banks will decide to do.

Here at Climate Pledge Collective we have long been baffled by the Liberals’ willingness to pour more and more money into keeping the tar sands alive. Strong climate policies are popular with voters in almost every province — and the Liberals didn’t win a single seat in Alberta even after buying a pipeline. So what gives? We think they’re worried that because the Canadian banks are overexposed to the tar sands, pulling the plug on this dying industry will create a financial crisis. If the CDN banks can start weaning themselves off oil, it will make it easier for the CDN government to do the same.

We hate to be the ones to tell you, but there’s a pandemic going on right now. While it’s still possible and important to protest in person, Climate Strikes are drawing smaller crowds. If you’re one of those people, like me, who can’t attend in-person protests right now because of health concerns, this is something meaningful you can do – even while the pandemic rages on. I booked an appointment with a representative at my branch and they called me at home. It only took about twenty minutes all told — including booking the appointment, taking the call and sending a follow-up email with links to the Banking on Climate Change report to pass on to the branch manager.

Ready to get involved?

We’ve noticed that this campaign spreads best through personal contacts. It’s easy to get people to like a tweet or share a meme, but getting them to actually take time out of their day and make a phone call requires a little bit of hand holding.

The number one thing you can do is make a list of ten or twenty people who might be interested and send them an email or make a call. If you’re on a group list of parents or alumni or what-have-you, drop them a line about BankSwitch.

2 thoughts on “Why BankSwitch? Why Now?”