We teamed up with MobilizeTO, attending their meetings and learning their approach and then joining them at a meeting with Councillor Layton — with the goal of getting Toronto to declare a climate emergency and advance our GhG targets under TransformTO.  We gathered volunteers on Facebook to lobby their councillors and report back.  Still working with MobilizeTO, we developed talking points for people willing to call their councillor on this topic. 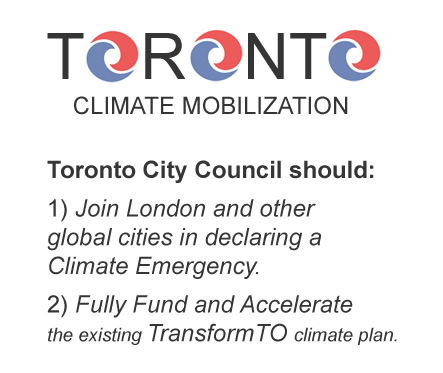 This is how we explained it in our first blogpost on the topic:

The Climate Mobilization is an international campaign to get governments to finally sit up and pay attention to the fact that we are facing a climate emergency.  The movement is calling for World-War-2-scale mobilization across society to rapidly reduce greenhouse gas emissions and aims to focus on cities first because city governments are more responsive to grassroots democratic organizing.

London, England; Hoboken, New Jersey; Berkeley, California and several other cities have already declared climate emergencies.  A motion to declare a climate emergency is currently under consideration in Vancouver.  A climate emergency declaration pairs a public announcement of the severity of our climate crisis with concrete plans to develop and implement an ambitious response.  In Toronto’s case, we have already done a lot of the necessary research while developing the TransformTO plan – so we will be able to move onto the implementation phase rapidly.

When we started, this movement was in its infancy and only a few cities had declared Climate Emergencies.  Since then, dozens of other cities in Canada and abroad have.  And several entire countries have done so.  Canada has also declared a Climate Emergency — but they did so without the ambitious emissions reduction plan, taking a lot of wind out of the Climate Emergency movement’s sails.

In the meantime, Mike Layton has also increased the targets for our TransformTO plan by instructing city staff to bring it in alignment with UN IPCC research — which has found our situation to be significantly more dire than we believed it to be when TransformTO was first developed.  We are keeping the pressure on, having recently organized an open-letter to John Tory from staff, students and alumni of his high school (Matt is a fellow U.T.S. alumni) asking for a Climate Emergency declaration and a mobilization of city resources that meets the severity of our crisis.

UPDATE: We won!  Along with many other Toronto environmental organizations and concerned students, parents and residents, it seems we pushed council to act on this.  John Tory, who was initially a firm opponent of such a declaration, presented the motion himself!  Read more here: https://globalnews.ca/news/5979872/toronto-city-council-climate-emergency/